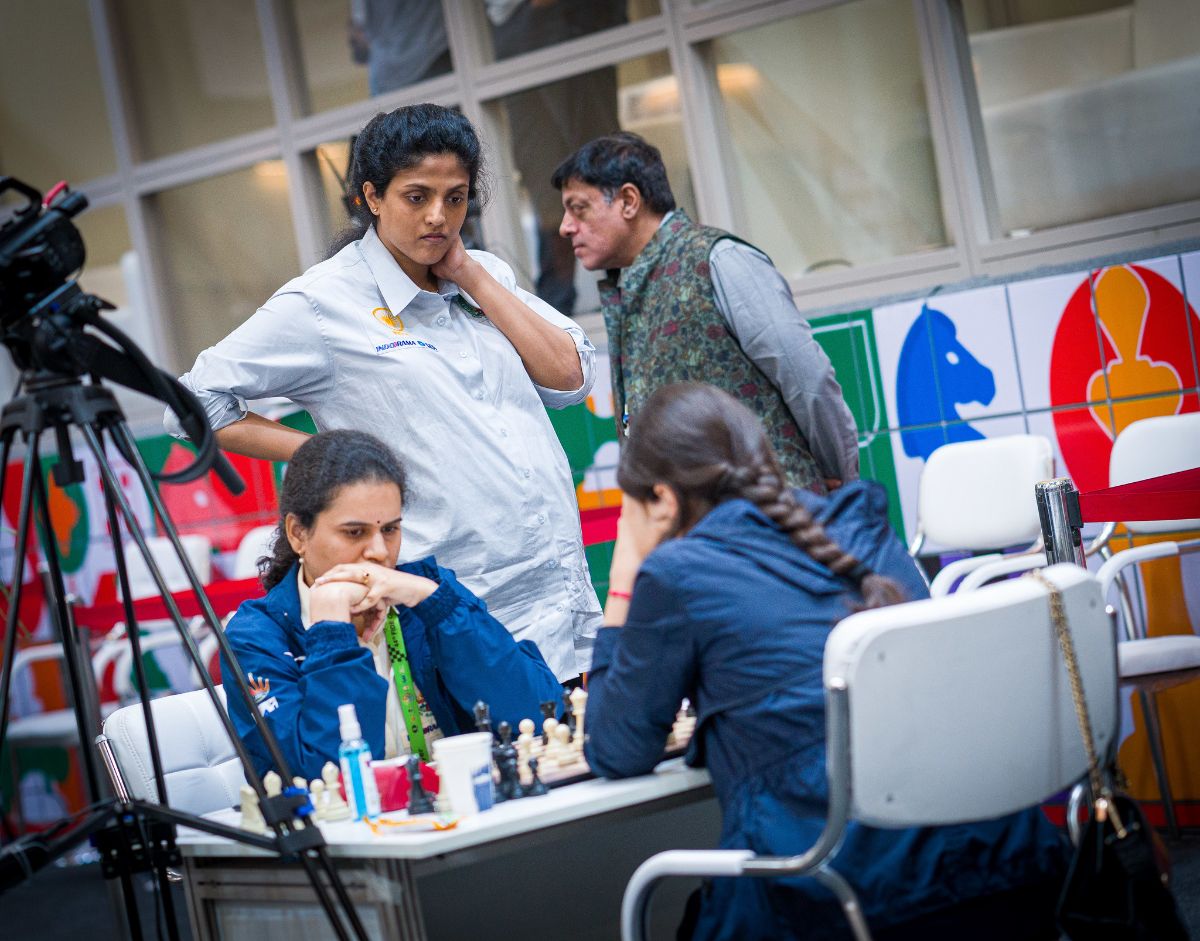 The top seeded Indian women team recorded their 7th streaight win defeating Azerbaijani eves by a 3-1 score in the seventh round of the 44th Chess Olympiad here at the Four Points by Sheraton.

It was a day of fluctuating fortunes for the Indian women as ace player Koneru Humpy suffered a rare defeat against Gunay  Mammadzada. It was a heart break for Humpy as she controlled the game much better and just when it appeared that she was on course, a blunder cost the Indian dearly. The game lasted 45 moves.

If Humpy misplayed a better position, Harika simply outplayed Khanim Balajayeva on the second board and yet an unexpected oversight resulted in a drawn rook and pawns endgame. At this point Indian eves were trailing the match and the positions on the remaining two boards did not look promising enough.

International Master Tania Sachdev, who has been one of the mainstays, came to the rescue of her team yet again and turned the tables on Ulviyya Fataliyeva who had put an inspired performance in the first few hours. With Tania winning the scores were even again.

R Vaishali outwitted Govhar Beydullayeva from what was a theoretically drawn rook and pawns endgame. This was a perfect example of perseverance from Vaishali who kept trying despite knowing that the position was a draw. Under pressure, Beydullayeva, desperately seeking a draw, cracked up and fell into what Vaishali knew as a forced victory.

Vaishali later confessed “Till the 40th turn, my game was dead equal and I considered settling for a draw. After Humpy’s loss, I had to keep pressing and interestingly, this was one position which we had worked in the camp with Boris Gelfand and I followed his suggestions to the ‘T’. A hall mark of the Women’s A Team has been the ability of every player to score a win when the Team needed it most.

Abhijit Kunte said “The way Harika, Vaishali and Tania continued in this pressure position is very heartening. The players understand the situation perfectly and deliver”. 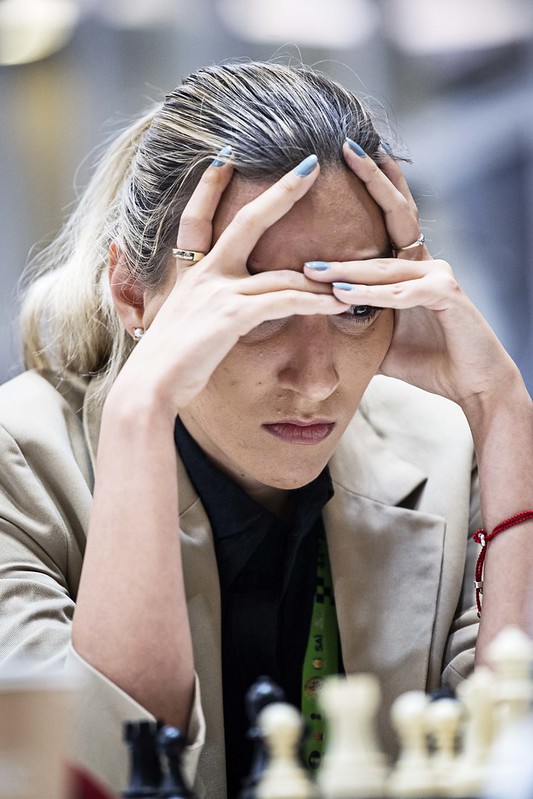 In other important matches of the day. Georgia bounced back after round six loss to beat Romania 2.5-1.5, Ukrained trounced Netherland 3.5-0.5 while Bulgaria held Poland to a 2-2 draw.

Top board fight between Irina Bulmaga and Nana Dzagnidze ended in a truce.  The Romanian top board Bulmaga played an active Nimzo Indian and managed to win material with active play but direct mating threats against her king without its protective pawn cover forced her to agree to a draw on move 35.

On the second table Sandu Mihaela used the solid Caro Kann to ward off attacking intentions of grandmaster and the current Georgian women’s chess champion Nino Batsiashvili Nino. The latter sacrificed a piece to open the kingside but couldn’t achieve more than a repetition of moves.

The much-needed for Georgian women came on the third board wherein Lela Javakhishvili defeated Alessia-Mihaela Ciolacu from the white side of a Catalan opening. Lela displayed top form in this key contest to keep her team’s chances alive.

Showing deep understanding in the middle game Lela pounced on the opportunity on the queen side to find a couple of weak pawns and pocketed them one after another. While it was a matter of routine technique, it still took a long time before Lela could ensure a full point.

The Ukrainian eves had no troubles whatsoever against Dutch women. Anna Muzychuk got a quick initiative with the Grunfeld defence playing black against Peng Zhaoqin. Opening certainly went wrong for Peng with her king stuck in the center under the direct onslaught of black’s centralised pieces. Anna won a pawn with a tactical stroke and converted it to a full point with proficiency.

On the third board Anna Ushenina ended up with a rook against a minor piece after a well calculated long and forced tactical sequence initiated by a piece sacrifice in the center by Ratsma Rosa. Two marauding white rooks on the seventh rank soon forced resignation.

Nataliya Buksa was able to create some chances on the light squares against the white king in the late middle game against an irregular opening by Tea-Lanchava on the fourth board. Buska marshalled her active pieces purposely and won the game delivering a thematic mate with the rooks and knight surrounding the king.

With just four rounds to come, team India seems poised for a podium finished. The battle however is will also be crucially depending on the nerves of the players in the business end of the biggest chess spectacle in the world.

Complete results for round 7 can be found at the official website for the Olympiad, https://chessolympiad.fide.com/women-results.

Standings after round 7 can be found at
https://chessolympiad.fide.com/women-standings.