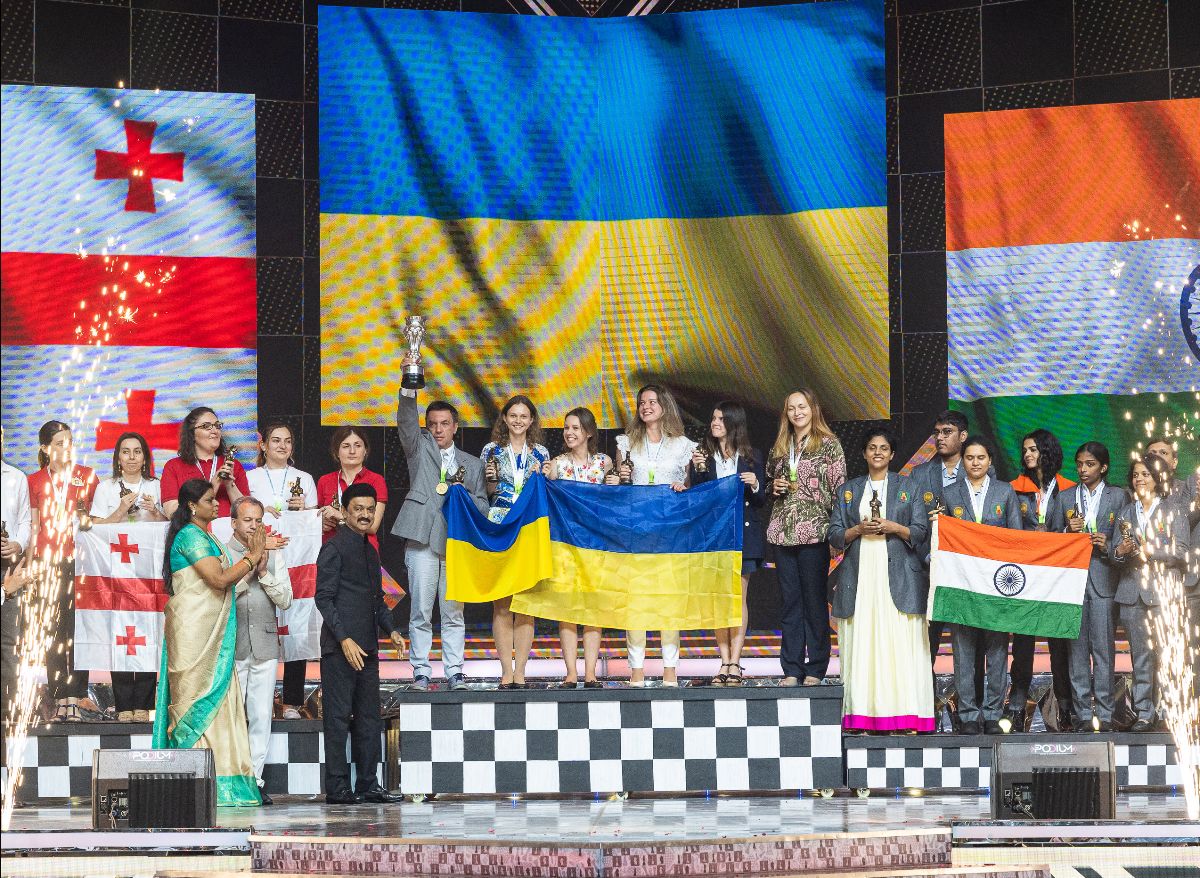 As many as five teams had realistic chances for gold going into the last round of the Women’s section in the 44th Chess Olympiad in Chennai. India A reclaimed its sole lead in the penultimate round and was ahead of the field with 17 points, followed by as many as four teams, all on 16 points: Poland, Azerbaijan, Ukraine, and Georgia. In the absence of the sanctioned Russia and the previous champions China, these teams formed the initial pool of favourites, making the last round wildly unpredictable. India A faced the USA, while the pursuers were paired against each other: Ukraine v Poland, Azerbaijan v Georgia.

The top Indian team looked invincible throughout the event, but towards the end, the #1 seed ran out of fuel. After seven successive wins and a draw with Ukraine came a first blow – a loss against Poland in Round 9. The hero of the Women’s section, WIM Oliwia Kiolbasa delivered her 9th consecutive win defeating Vaishali R and bringing back the intrigue of who would claim the gold. Nevertheless, in the next round, Koneru and colleagues pulled themselves together and came back to the lead with a convincing 3½: ½ victory over Kazakhstan.

But the last round proved that any fan euphoria was untimely – India suddenly lost 1-3 to the 7th seed, Team USA. Carissa Yip defeated Tania Sachdev, who had a fantastic 8 out of 10 undefeated before this game, and Tatev Abrahamyan won against Bhakti Kulkarni, also delivering her first loss. As a result, India A had to settle only for the bronze. The gold medals were left up for grabs.

The land of legendary female champions, Georgia maintains the status of one of the world’s leaders in women’s chess. In Chennai, they were rated #3 in the starting list, just a couple of rating points behind Ukraine, and lived up to the expectations. In Round 6, Georgian ladies lost to India A, which seemed like a possible match for gold at the time. However, long tournament distance and intense competition proved any conclusion premature. Georgia went on winning weaker opponents and made draws with Poland and Ukraine. In the last round, the experienced team had no mercy against the young Azerbaijan squad (who played a great event nevertheless). Nino Batsiashvili and Meri Arabidze won their games, securing at least silver medals.

Ukraine is one of the initial favourites in any women’s competition. No other team could boast two former women’s world champions on the roster, Anna Ushenina and Mariya Muzychuk. Yet the team started somewhat slow. Draws with Azerbaijan and Romania in Rounds 5 and 6 seemingly indicated that the team was not in its best form, but Ukraine never left the orbit of fighting for medals. In Rounds 8 and 9, the squad led by the Muzychuk sisters drew with direct rivals India A and Georgia. They did not lose a single match, which usually helps with possible tiebreaks, and confidently won the last two, including the most important one in the final round, against Poland. Mariya Muzychuk set the tone by winning against Alina Kashlinskaya on board 1, and Anna Ushenina defeated the discovery of the tournament, Oliwia Kiolbasa.

Ukraine and Georgia leapfrogged India A at the last moment, and all that was left was to calculate the complicated tiebreak by which Ukraine came out on top.

Ukraine won gold in the women’s section for the second time after Turin 2006; and this is the seventh time the Ukrainian women have won medals in the last eight Olympiads. But the 2022 victory, arriving at such a difficult time, is especially valuable.

“I am happy but very tired,” said team captain GM Michail Brodsky at the press conference right after the last round. “I can’t believe that we have won the Olympiad!” 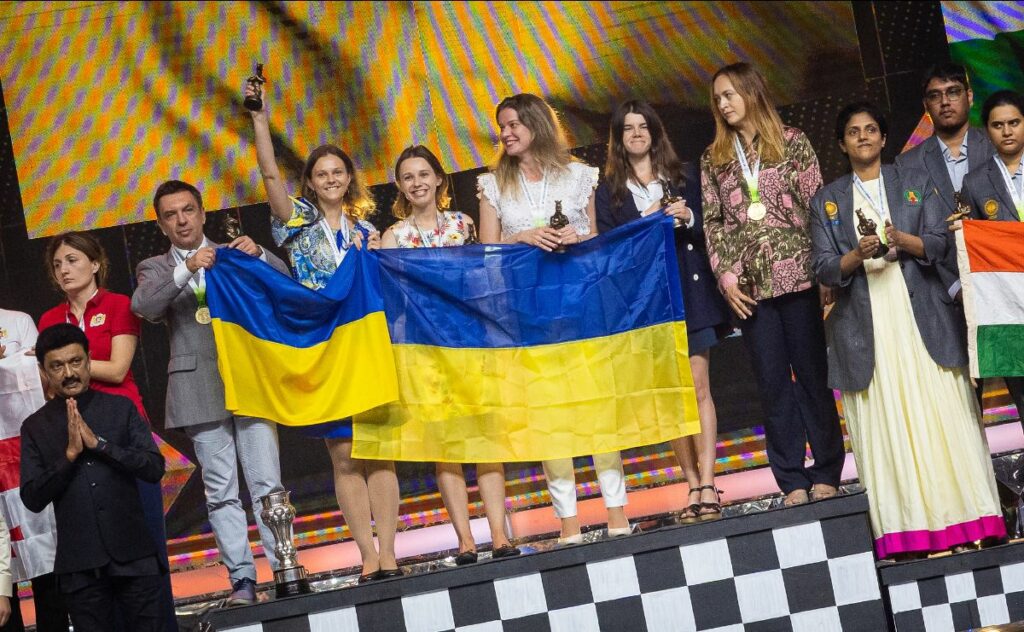 A moment of celebration for the Ukrainian ladies. PHOTO: Lennart Ootes

Complete final standings and results, including team and individual performances, can be found at the following link:
https://chennai2022.fide.com/women-standings.

For any other information, please visit the tournament website, http://chennai2022.fide.com.