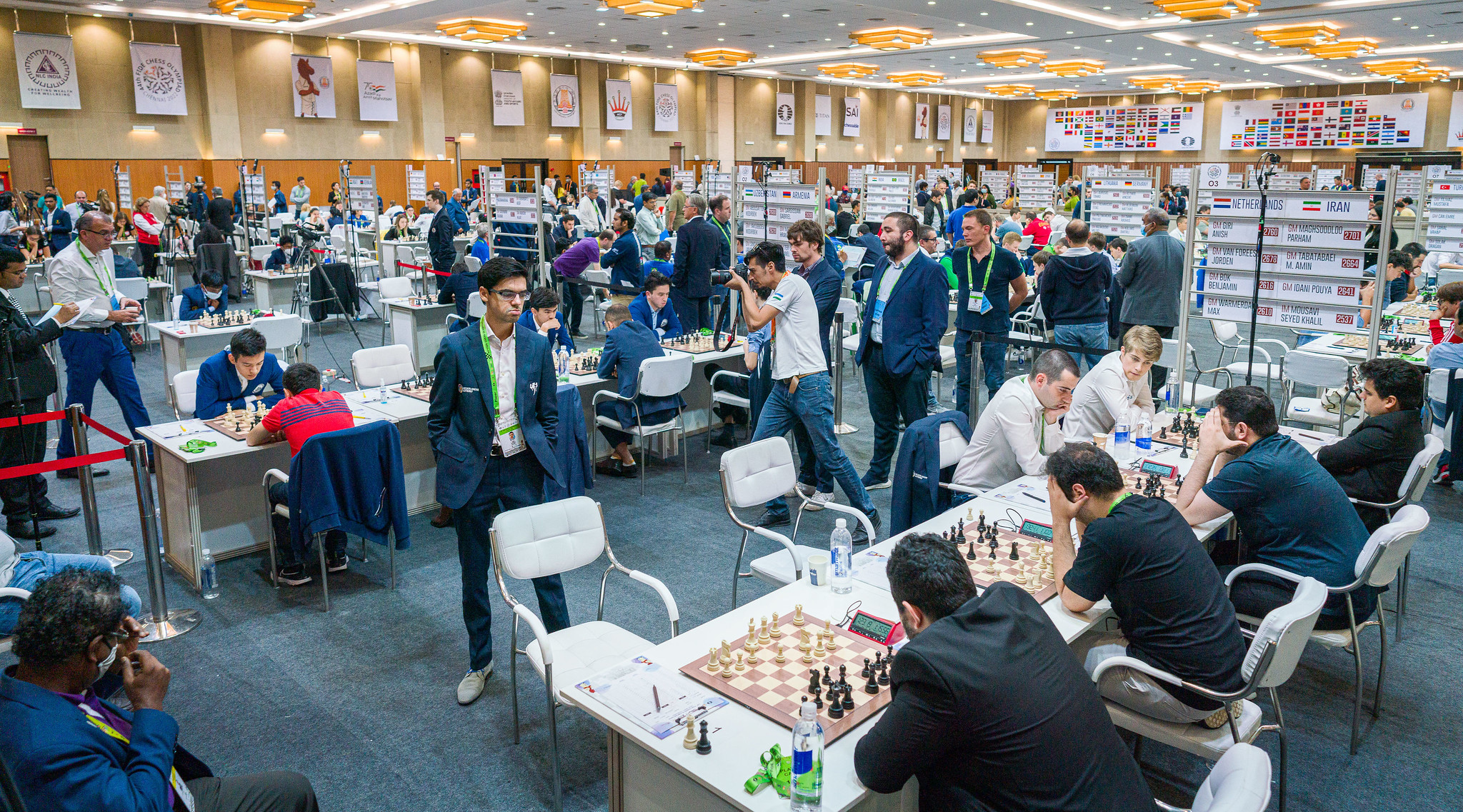 The battle for the medal was all the rage in the ninth round of the Olympiad, played this afternoon at the Sheraton Four Points Convention Center in Mahabalipuram. No team is budging an inch and the matches are fast and furious. 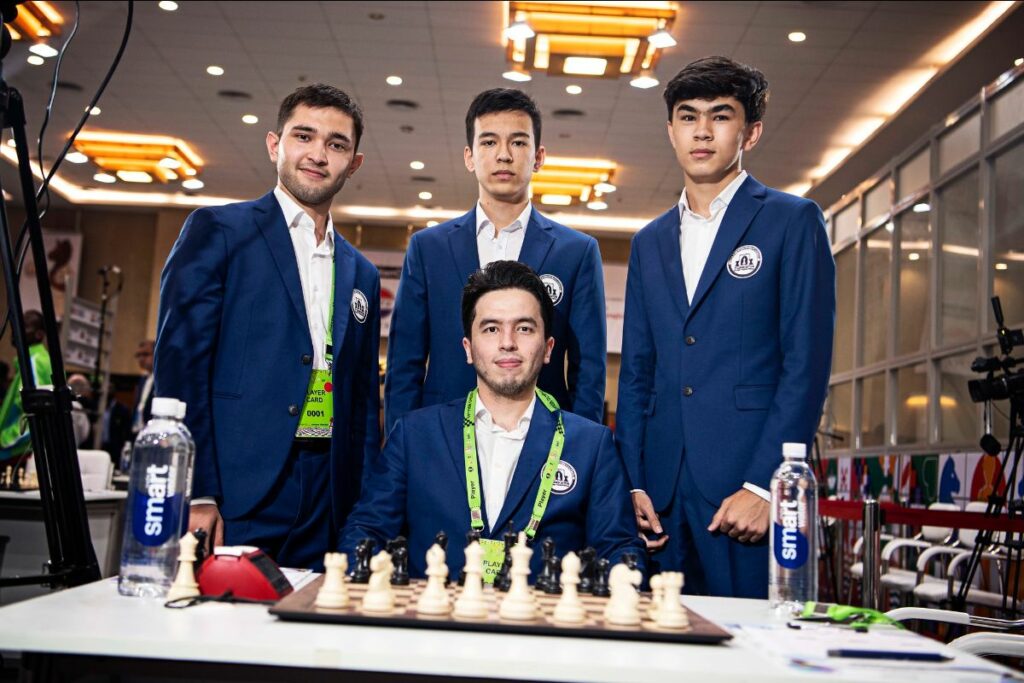 Vakhidov’s feat is even more praiseworthy – he beat Robert Hovhannisyan (undefeated to the date) with the black pieces. With this win, the Uzbekistan team is now the sole leader of the Olympiad with 16 points with two rounds to go. In addition, they are the only undefeated team of the tournament – a huge surprise. 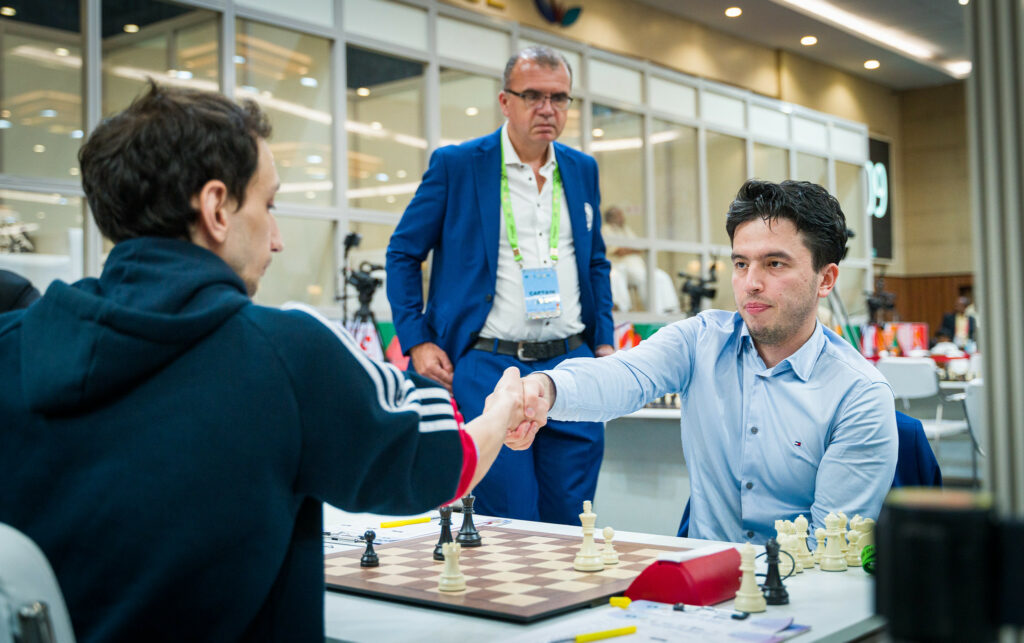 Jahongir Vakhidov, at the beginning of round 9. Photo: Lennart Ootes

As if that were not enough, the Uzbek’s were greatly favored by the other results of the round. Azerbaijan couldn’t get past a 2-2 tie against the India B juniors – Praggnanandhaa defeated Durarbayli on board three but young gun Sadhwani fell to experienced grandmaster Abasov on the fourth board.

India B and Armenia are now sharing second-third place with 15 points, trailing the leaders by just one point.

In the other key match of the day, the Netherlands and Iran also shared the points in a match that ended with four draws, leaving both teams with 14 points. The other teams didn’t miss the opportunity to keep their options open for the podium.

Despite Levon Aronian’s unexpected defeat against Theodorou with White, the United States beat Greece by the minimum 2.5-1.5 score, in good measure due to Wesley So’s key win – he is still undefeated. Nonetheless, the hero of the day in the USA camp was Fabiano Caruana. 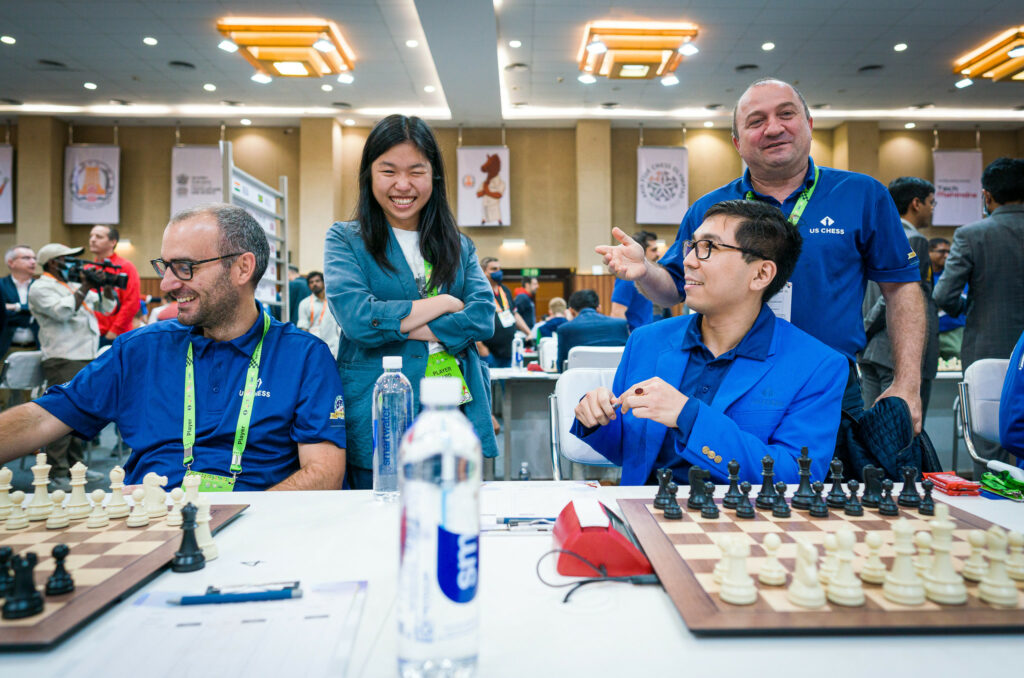 Good atmosphere in the US team, despite the not-so-good results. PHOTO: Lennart Ootes

After two consecutive defeats, he took down Greece’s number one player Mastrovasilis in a great game with Black in the Sicilian Sveshnikov Defense. The spectacular move 21…Bh6 was the beginning of a winning attack on the white king – a game for the ages.

India A recovered positions at the expense of Brazil, who have been performing at a high level in the tournament. Erigaisi and Sasikiran, on third and fourth boards, were the heroes of the national team, clearing a 3-1 victory for the local team.

With only two rounds to go and three medals in play, tomorrow’s pairings are already pretty meaningful. India B (15) will face Uzbekistan (16) in a clash between the youngsters.

Match two will see an Olympiad classic: Azerbaijan (14) vs Armenia (15). Whilst a draw might be a decent result for Armenia, Azerbaijan needs to go for broke to get a chance to fight for the gold medal.

Alongside the Chess Olympiad, the International Chess Federation General Assembly – and general elections – have taken place in Chennai.

Arkady Dvorkovich was re-elected today for a second term as FIDE President with 157 votes, against 16 for his electoral opponent, the Ukrainian chess Grandmaster Andrii Baryshpolets. The third candidate, Bachar Kouatly from France, withdrew his candidacy before the voting started. 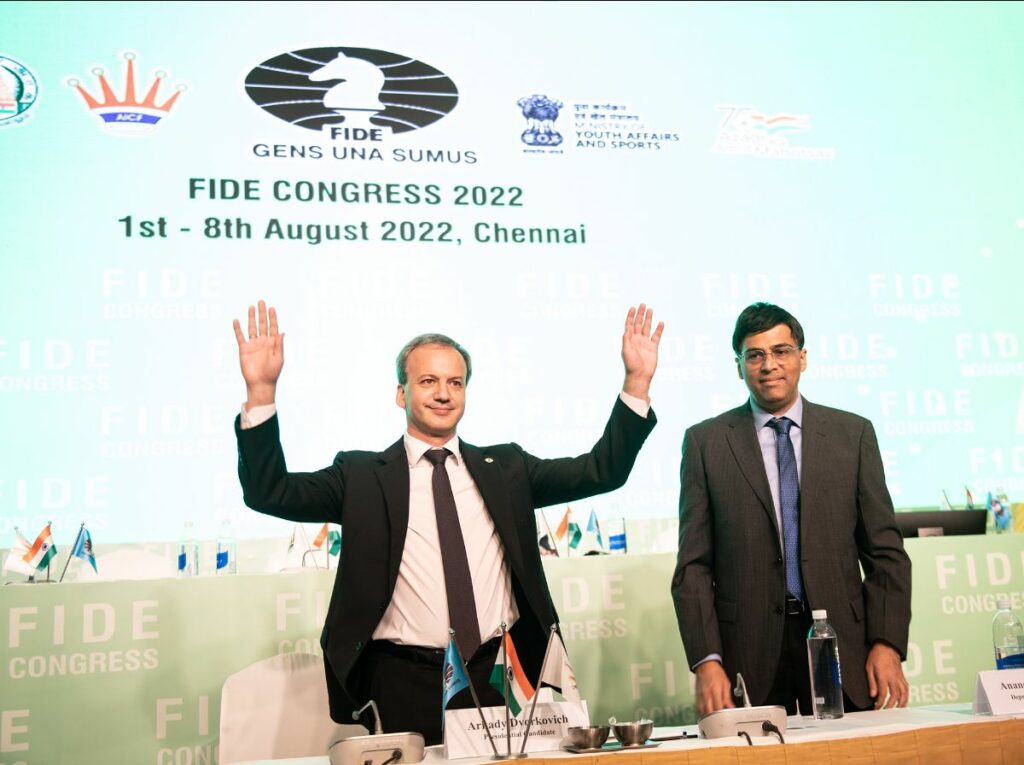 Arkady Dvorkovich was reelected for a second term, while Vishy Anand is the new FIDE Deputy President. PHOTO: David Llada

Round 10 will be played August 8th at 3pm sharp and can be followed live on the tournament website.